My name is Benjamin Molter and I am a senior pursuing an International Business Major, a Marketing Major, and a German Minor.

For a long time, I knew that I wanted to pursue a study abroad of some sorts during my college career and I finally made my dream a reality this past summer. At the end of May 2019, I packed my bags and flew to Germany to begin my journey! Over the summer, I stayed at our partnering university in Germany and I successfully completed an internship with private universities in Germany and Luxembourg. While working with the universities, I learned how to communicate with coworkers from around the world, conduct research more efficiently, and write proposals and emails catering to the businesses’ needs and wants. I would highly recommend an international internship because of all the unique benefits you get out of it. You get to live in the dorms in Germany for very cheap, possibly work in two different countries at the same time, learn a bunch about business outside the United States, and be able to travel often and efficiently.

When I wasn’t working, I was traveling nearly every weekend I was there. I would travel with other Americans who were also doing research at the university we stayed at. To save money, we would stay at hostels. Because of this, we met people from all around the globe which really broadened my perspective. I traveled to Germany, Luxembourg, the Netherlands, Belgium, Italy, Slovakia, Hungary, Croatia, and Austria. If I had to choose a favorite city, it would have to be Budapest because it was beautiful. The people were very friendly, there was a lot to do, the food was delicious, and it was very affordable.

What surprised me the most about the whole experience of traveling abroad was how well each country could speak English. Almost everyone from the age of 30 and down speaks English fluently on top of their native language(s) and another one based on what they learned in school. It really inspires me to continue to perfect my fluency in German as well as learning a couple other languages too.

The first thing that I took away from this summer was that to achieve what you want; you need to go out and take opportunities that come your way. I probably would not have done the internship this summer if I didn’t go out of my way to talk to people about it and complete all the work that was required for me to go. Though it was a bit pricey, I made it affordable by doing extra work and obtaining scholarships to help fund my expenses. The second thing that I took away from this summer was that you should travel often and make as many connections as you can. There is so much to see and do while traveling that teaches you so much about the world we all live in. Meeting and talking to people while traveling to different countries allows you to learn about the culture and history of each country more than staying in your home country.

What I am looking forward to most this Fall would be continuing work with the International Business Student Organization (IBSO). We are looking to expand our organization, creating interesting and new events, as well as taking another trip sometime during the school year.

Ziad Lajnef visited the School of Management to talk about his experiences working in the internal audits industry. He graduated from UM-Flint in 2002 with a BBA in Accounting with a Finance concentration. Shortly after, Lajnef went on to complete his MBA in 2003. During his undergrad at UM-Flint, he participated in a study abroad trip to Russia and visited the GM plant in Togliatti and the GM headquarters in Moscow. He is currently the Internal Audit Director for General Motors and oversees annual risk assessment and execution of the audit plan for North and South America. Lajef opened his presentation by giving advice to current students by encouraging them to reach out to their professor for their guidance. Lajnef said “Students at UM-Flint have a unique advantage. At a bigger school, you don’t have as much contact with your professors. Here you have direct access to ask professor about whatever you want. Use them to guide you for what you want to do in the future. Use their experience to your advantage to get the most out of your education.”

In his presentation, The Foundational Pillars for Establishing Trust with Internal Audit Customers, Lajnef elaborated on three principles of internal audits. First was to deeply consider strategies to use. Second principle is to think about the talent and diversity of the team. Lastly focused on the outlook on short-term and long-term for tactical planning and processing. Later in his presentation, Lajnef spoke about the importance of analyzing data and knowing the market you are in. His advice was to, “Become date savvy. The more you’re involved and knowledgeable in the market, the better off you’ll be.”

If you’re interested in learning more about Lajnef’s past experiences as a chef or his journey into the business world, he was featured in the fall 2018 SOM Business Magazine as the alumni spotlight! Click the link and go to page 9 to read more: https://go.umflint.edu/BusinessMagazine2018

If you’re interested in being an alumni speaker or volunteering for our upcoming events, please email Anna Swartz at annas@umflint.edu to find how you can give back to the UM-Flint community! 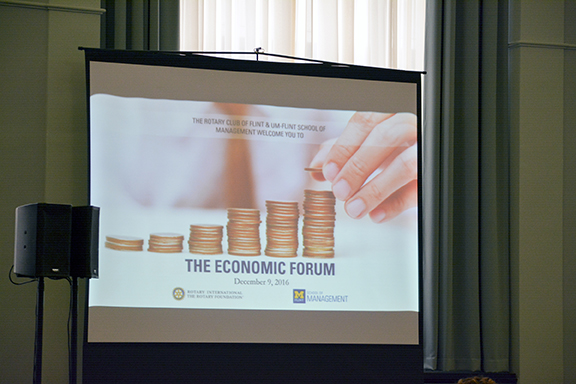 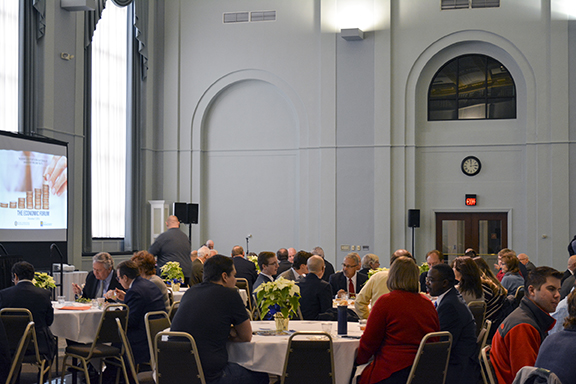 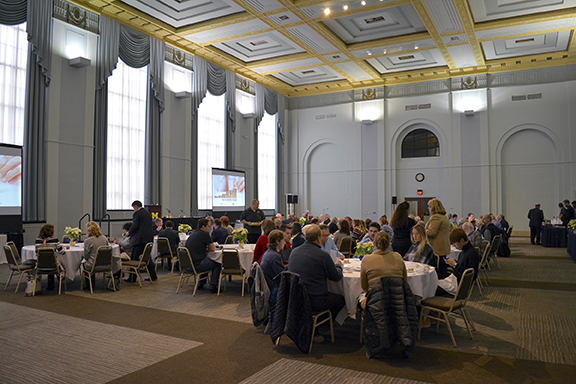 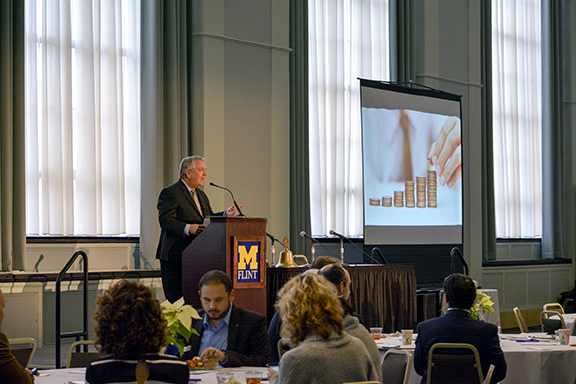 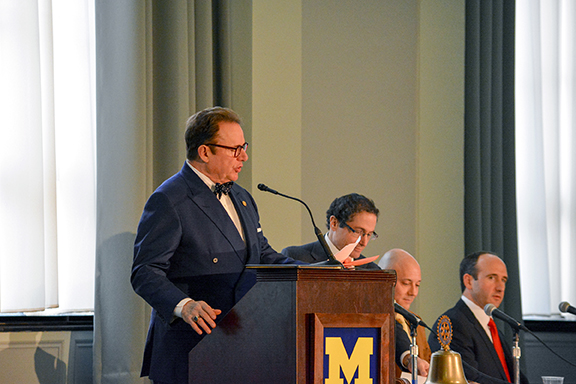 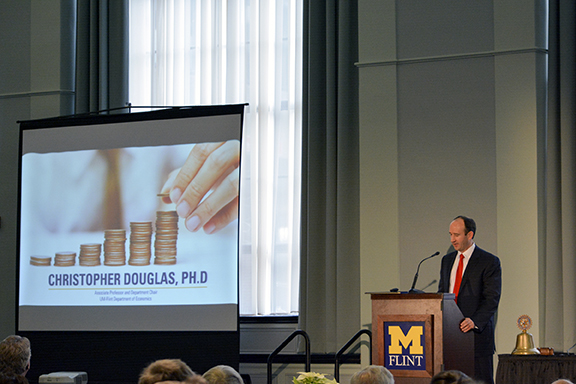 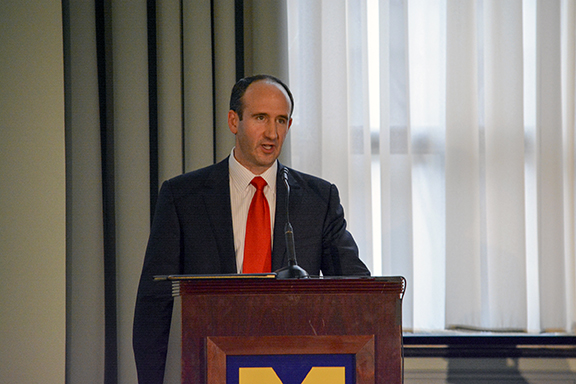 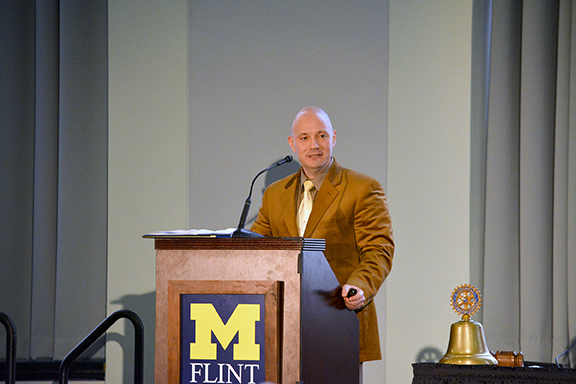 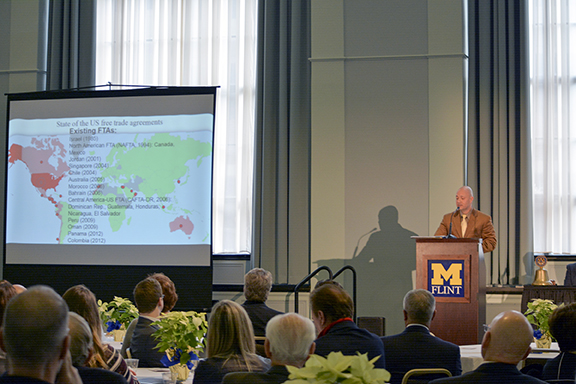 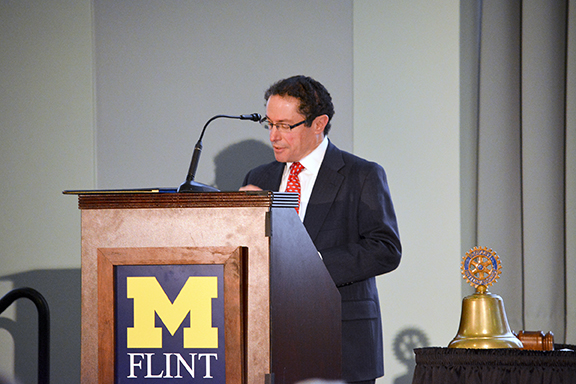 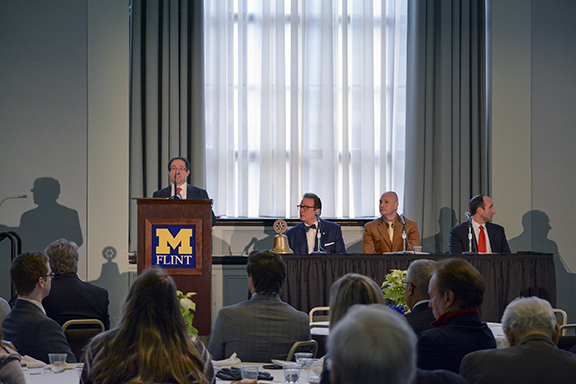 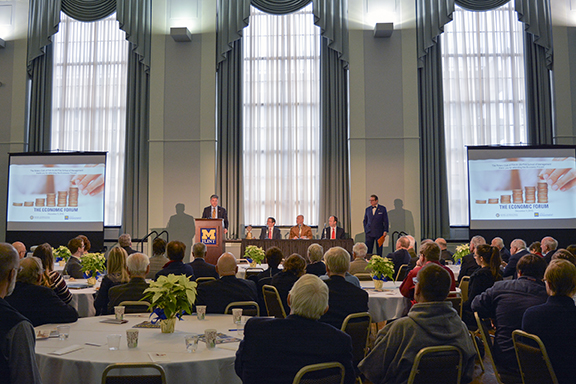 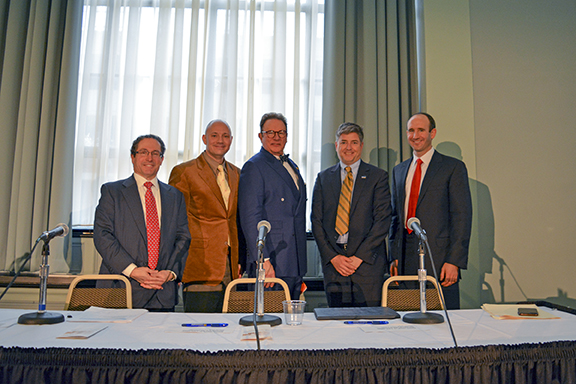 The 2016 Economic Forum was hosted by The Rotary Club of Flint & the University of Michigan-Flint School of Management on December 9th, 2016. The event took place in the Northbank Ballroom in Downtown Flint, Michigan.

While international trade and investment play critical roles within specific companies, their effects can be much greater—in some cases affecting entire markets.

In his article, “The effect of foreign trade and investment liberalization on spatial concentration of economic activity,” accepted for publication in the International Business Review (November 2013), Yener Kandogan, Ph.D., associate dean and professor of international business for the School of Management, examines data from 168 countries to examine the impact of globalization (and other factors) on economic activity.

“Countries have long been liberalizing their international trade and investment; some globally under the World Trade Organization, while some took the economic integration deeper regionally,” said Kandogan.

“After writing a previous article on the shifts in economic center of gravity towards Asia, I was curious whether these integration efforts would lead to mega cities. For example, China has been benefiting greatly from globalization and economic development, and we observe such very large cities being built in very short periods of time. I wondered if this was caused by globalization only and what factors would cause such high concentrations of economic activity.”

As part of his study, Kandogan studied the varying responses of countries to foreign trade and direct investment liberalization on spatial concentration of their economic activity by considering moderating factors such as market size and level of economic development. His conclusions were based on data from 168 countries over the past 30 years.

“What I found is that international liberalization alone (the process of globalization) does not necessarily cause economic agglomeration or the the development of mega cities. Other factors, such as the size of a market and its level of economic development, also play significant roles,” he said. “The results suggested that less developed countries with small markets tend to have more concentrated economic centers, and that globalization leads to more concentration for developed and smaller countries.”

One of the key lessons businesses can learn from Kandogan’s work is the value of location and how specific factors are changing markets geographically.

“Location decisions are one of the most important decisions for multinationals as it affects their efficiency, production costs, competitiveness, access to markets, key resources and strategic assets,” Kandogan explained. “Some of these factors are associated with agglomeration of economic activity, and revealed that multinationals prefer existing centers of economic activity as their operation center for more developed and smaller countries.”

In February, the Oakland University School of Business invited teams of top undergraduate students from more than 200 highly respected international academic institutions to take part in their International Case Competition (OUICC). Aimed at building and practicing teamwork and leadership skills, the competition consisted of three elimination rounds of judged case presentations, with prizes and awards going to the three finalists.

In the initial round, all participating teams were required to submit a video presentation and case summary to the OUICC judging panel by email. From all the first round submissions, only 12 teams were selected to advance to the next stage of competition. In round two, the teams delivered their presentations via interactive live feeds, and were required to defend their strategies and arguments during Q&A sessions with the OUICC panel of judges.

Then with only twelve hours between rounds two and three to make improvements based on Q&A feedback, the top three teams made their best case in the third round. In the end, the School of Management student team’s presentation won the day and took home the first place award.