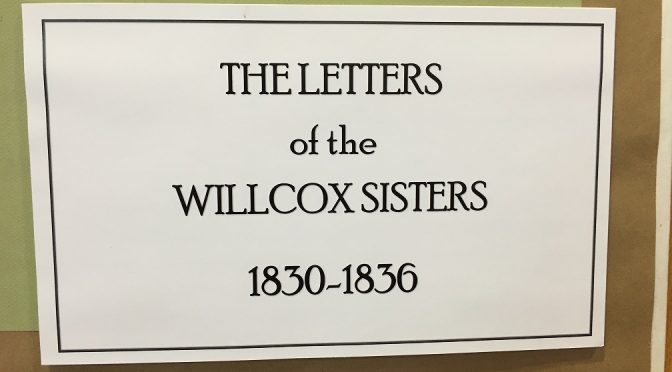 Scroll to bottom of article to see links for online digital content of Willcox Collection from the Genesee Historical Archives.

The Woman Who Works for a Living For her capstone project in History, Jeanette Routhier’s created a display demonstrating an historical examination of the contents of a box of materials she found in the Genesee County Archives.

The box contained historically educational “primary source materials,” the majority in the form of letters written by the Willcox sisters.

The letters were not originally intended to act as a mirror to the time period, nor to serve as an educational tool for historians.   They were, in fact, private correspondence within a family that became poverty stricken.  The letters detail  the struggle of the women of the family to survive in a male-dominated society which offered them few opportunities to provide for themselves outside of the protection of male members of their family.

These letters were intended to be, and remain, private; letters between family.  They were not created with the express purpose of becoming a first person observation of the times in which these women lived.

As often happens with documents preserved over time,  primary source materials — such as these letters — do just that.   They become an historical record of the world in which the authors lived.  They teach modern historians about daily life of people living during earlier time periods.   They pass along valuable information so that modern students of history can better understand what has happened and how our modern society developed into its current state.

From the letters, beautifully written in the cursive hand taught to all students of that time, we come to know the Wilcox family and follow the course of their lives over time. Jeanette created the display to lead us through the years along with the sisters, beginning with their father, who was shipped off to Debtor’s Prison in the early 1830s, leaving his daughters destitute.

This was a time when women had few rights.  They were generally the chattel   (property)  of their fathers or husbands.

Single women living alone and depending upon their own efforts to survive had to find work in a world that considered working women a mere step up from slave labor.   Finding work was difficult.  Once obtained, there were no benefits other than a very meager income.     Hours were extremely long.  Conditions in the workplace were poor.  Opportunities for a better future were non-existent. Our information about the time period and conditions women endured is passed along to us by history teachers.   History teachers learn the history from books.  But where does the information in the books come from?    And how accurate is it?   Does the writer of a book have pre-conceived notions of life in a time period which predates their own?   Does that then appear in the book? Where can we get an accurate description, one passed down to us through time by people who lived through experiences long before we were born?

We find that information in “primary source” materials — the written record of people who were alive and witnessed events of a time before our own.

Primary source materials include such items as letters, the written descriptions of life and events passed down through time, describing conditions that no longer obtain and that we no longer understand through our own experience. To know more about the time period and conditions that women experience, Ms Routhier opened a box of primary source materials stored in the University of Michigan-Flint Archive.

Jeanette located Box 1 of the George Willcox Papers.  She opened it, and began reading the contents. Through letters saved over the centuries, Jeanette was able to piece together the world in which the Willcox sisters lived.   And through her display, Jeanette shared with us what it was like to live as a single woman in early 1800s United States. Using the Archives and these original documents, which recorded first person observations of the life of these women, Jeanette has given us a small taste of the struggle of women trying to survive on their own in 1800s United States. This display has now been dismantled.

To see the material upon which this display was based, visit the Genesee Historical Collections Center, or use the links below to view the digitalized contents of the Lyman George Willcox collection stored in the Archives.

From the online digital collection of the

(Click above to access entire online collection, or view the individual letters using the links provided below.)

Lyman George Willcox (1831-1918), a native of Rochester, Oakland County, Michigan, was a lawyer, an officer during the Civil War, orator, public servant, and journalist.  His father, Lyman J. Willcox, settled in Michigan during the 1820s.  The son, known as George, graduated from Hamilton College in 1855.  He went to Kansas in 1856 to study the pro- and anti-slavery situation, then went to Omaha the next year.  He returned to Detroit, and in 1861 was appointed captain of Company B, 3rd Michigan Cavalry Regiment.  His company saw action at Corinth and Iuka, Mississippi, and he left the service in 1864 as a major.  From 1865 to 1870, he was in Antrim County and in Traverse City, working as a lawyer and newspaper editor and in 1867 as U.S. Land Office registrar.  From 1871 to 1879, he was a fruit farmer in Centralia, Illinois, in addition to practicing law and regularly speaking as an orator.  He returned to Michigan, and was a law partner with his brother in Pontiac from 1879 to 1885.  He continued his legal and journalistic interests in Bay City, where he lived from 1885 to 1910, at which point he lived with his son George in Saginaw.  His papers include letters to and from his father from relatives in New York; correspondence with his wife during the Civil War; military orders and papers from his service in the Civil War; clippings from his political activities; and various reminiscences and documents from his activity in Civil War veterans’ organizations.