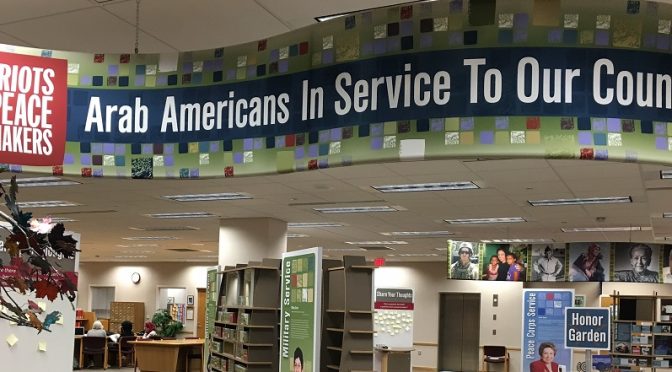 In Service to Our Country Early in September, a new and thought-provoking walk-though display was assembled on the 3rd floor of the Thompson Library near the main entrance.

The display addresses what one person interviewed described as  the responsibility to give back to your nation.   Various categories of service are listed, all that serve in one aspect or the other as either:   Patriot, Peace Maker, or Diplomat.

Brought to us by the Arab American National Museum, this traveling display will be available to experience in the University of Michigan-Flint Thompson Library through December 2016.

The display highlights the contribution of Arab Americans in service to their country from the 1800’s to present day. First on the list of information available to the viewer as one walks through the display is a simple but perhaps not well known fact; Arab Americans are not a small nor homogeneous group of tight-knit people with an identical ethnicity.

They derive from a very diverse popularion with widely disparate backgrounds, heritages, customs and religions coming from a large area of the globe that consists of many countries and regions.   The one thing they have in common is that they all have roots in that geographic area which spans the lands  identified as the Middle East and across the length of northern Africa. Whether they are men or women, Muslims or Christians, old or young, these Americans have a long history of service to their country. As you walk through the display, you’ll see images of men and women that served in various branches of the United States armed forces. You can read stories of men and women who served in World War I (nearly 14,000), World War II (over 15,000) and other engagements — many serving with distinction and honors.

Too many gave their country the last, full measure of devotion.

You can read about Rear Admiral Faye Glenn Abdellah, who also

served as Deputy Surgeon General (1949 – 1989) — the first nurse and the first woman to hold that position.  Descending from both Algerian and Scottish heritage, her theories revolutionized nursing care, altering it from the standard disease-centered care to an improved  patient-centered approach. women) who served the US military along with where and how they served, including the 3,500 Arab Americans currently serving their country today. After the infamy that was 9/11, many of these patriots found their loyalties questioned, and as a result the Association of Patriotic Arab Americans in the Military (APAAM) formed to offer support to Americans who, through no other reason than their ethnic origins, came under special scrutiny. Arab American service members, people who — by their beliefs and record of service to their nation — consider themselves Patriots. Being a patriot does not prevent a person from also being a Peace Maker, however.  As you walk through the fascinating display, you’ll see the record of many Arab Americans who served their nation in an entirely different way, through the Peace Corps. The Peace Corps was established in 1961 by President John F. Kennedy to promote world peace and provide an international public service.  It is a volunteer organization which helps communities around the world understand U.S. culture while helping Americans understand the cultures of other groups and nations. The list of volunteers includes many who had previously served in the United States military, such as Antoinette Byda Peters Day (US Army, 1966 – 1970; Peace Corps, 2007 – 2009), proving that Arab Americans can be both Patriots AND Peace Makers within their lives, contributing both service to their country and service to their fellow man on behalf of their country. Another way many Arab Americans have combined these two aspects into their lives has been service in the U. S. Diplomatic Corps, many serving in positions in countries around the globe since World War II and in even greater numbers within the past 30 years. As you wander through the expansive display, you’ll see interesting artifacts, watch video clips, listen to audio descriptions, and even get a chance to learn a few words in other languages. The historical information is informative, and photos are striking, and it is well worth the time to visit and meander through the display. But alas, it is only on loan to the University of Michigan-Flint from the Arab American National Museum for a limited time.

We urge you to take advantage of this fascinating and informative display while it is available to our campus. To visit the display, enter the Thompson Library  (University of Michigan-Flint) on the 3rd floor.

The display is easily seen from the entrance, directly behind the INFORMATION DESK.