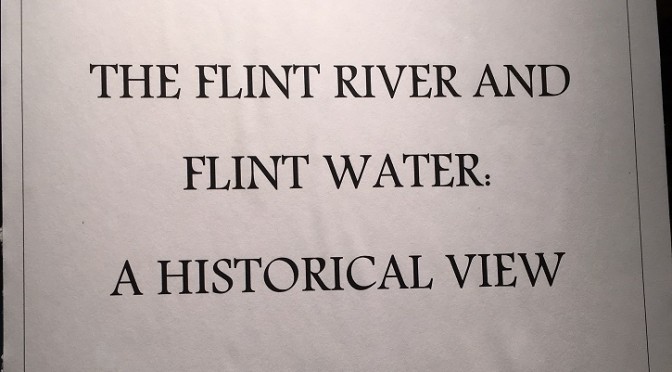 While the current water crisis involving lead pipes and contaminated water is very much in local, national and international news, water has been an issue in Flint for many years. Water from the Flint River has always been central to our city, for drinking as well as for other purposes.

Flint was settled on the banks of the Flint River because of the easy access to fresh water and river transportation it offered, all conveniently located between the settlements of Saginaw and Detroit. Water continued to be a focus as the logging industry revved up into high gear, with rivers providing quick travel avenues for logs headed to mills to be finished into lumber which would support both shipbuilding and the rise of new cities. The Crapo lumber mill on the Flint River helped fuel the growth of early industrial Flint.  And the Crapo family, which settled in Flint, went on to bring further industrialization to the area — and the world. As industrialization rose, so did contamination of the very water which drew people to Flint from the beginning. Controversy arose over whether local citizens should rely on water from their river, or bring water in from Detroit long before the failure of aging plumbing infrastructure. In addition to concerns over water quality, Flint has faced other threats related to our river, such as fires and floods. How our city handles its current water  crisis will determine the course of its future, but without doubt the interconnection between the citizenry of Flint, Michigan with the Flint River will continue to be intertwined.