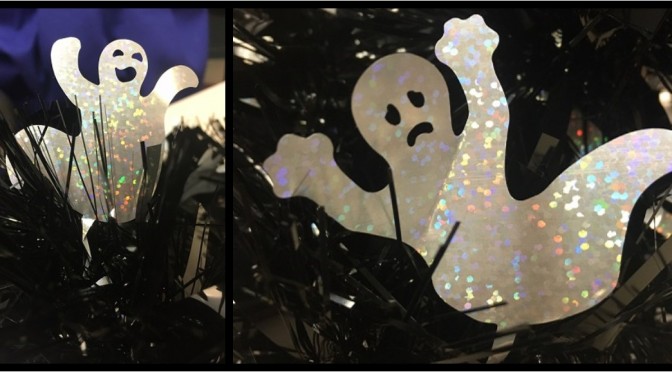 When I first arrived at Thompson Library, nearly 20 years ago,  Grant and I found ourselves working together over a weekend.  During a lull in activity,  Grant passed the time by introducing me to his friend,  the Library Ghost.

Not one to rattle easily, I scoffed at the idea of a resident supernatural researcher.     But Grant persisted, relating incident after incident which gave at least anecdotal evidence in support of academic inquiry from beyond the Great Beyond.

I remained a staunch skeptic.

Then, a few years later while I was alone in the library working late into the night on a project with a short deadline, I experienced a strange event which I described to Grant at our next meeting over the proverbial water cooler.   Here’s what happened:

As I sat in my office, back to the door, focused on my computer,  the rest of the building in darkness, I was suddenly startled by a very LOUD noise just outside my office door.  It echoed in the silence of the empty building.

More than a little bit concerned, I walked cautiously to the door and froze.   I remained stock-still, peering into the gloom beyond the curtain of “emergency lights” shrouding the front desk.   Was someone out there?

In the wall next to my office were built-in oak shelves where we kept a number of books that were used regularly.   One such item was a thick tomb commonly referred to as the Blue Book.  It was the  list of current UM employees (including Flint).

But the book hadn’t merely fallen off the shelf, a near impossibility as the shelves were both deep and strong — and the substantial book had been placed well back from the edge.

No.  It hadn’t simply fallen off the shelf.  It had flown out into the center of the room, landing a good 5 feet from the shelf.

It had landed on its spine — and had flown open.   Not just open;  the pages were turning, as if blown by a stiff wind (or flipped by unseen fingers?).    Had there been a breeze,  perhaps the hair on the back of my neck would not have risen.      However …

After relating the story to Grant the next day, he assured me I had, indeed, finally met the Library Ghost, who no doubt was investigating our current staff listing.  He said this with such absolute conviction that I again experienced that moment of hair feeling quite out of place on the back of my neck.

That happened decades ago.  And yet, I think of it often.  Such was the power of Grant’s incredible ability to tell a story so convincingly that you would believe, even for a moment, that he was telling you about a real and verified entity, the Library Ghost.

And then Grant would smile.  You know the one.  He had his audience in the palm of his hand, and he was quite satisfied.

It was well known among his co-workers,  family and  friends that Grant enjoyed doing research.   It wasn’t “just a job” for Grant.   This helping people learn to find answers to their most pressing questions, or even just to satisfy a passing interest,  was what he loved.    It was his passion.

I have found myself wondering, over the years, if he occasionally visits our library again.   Perhaps he returns to complete some research project he never quite got around to in life?   Or maybe to assist his old friend, the Library Ghost of whom he was so fond of discussing?

I like to think that, in a place they both loved,  they have each found a kindred spirit. Following is the article Grant wrote for the UM-Flint paper long ago.   We re-print it here in full.   We hope you enjoy it as much as  we did, those of us who knew Grant and heard him speak fondly of his friend, the Library Ghost.

The Ghost in the Library

Saturday closing time rolls around on a pleasant,  early-spring afternoon.    The Thompson Library has been sparsely populated all day; not even the specter of term papers soon due can keep most students from spending the day outside in the sun.

The librarian on duty makes his customary tour of the building after locking the entrance.   He checks each floor, looking down the rows between the stacks,  into the study rooms,  and along the empty study carrels for the stray visitor who may have nodded off and missed the closing announcement.

He takes the stairs to the first floor,  the last stage of his circuit,  and checks the stacks first.   Finding them empty,  he emerges onto the floor of the atrium,  the building’s most striking architectural feature.   Caught up in daily work, he seldom visits this spot;  rather than a part of the library’s general business area,  the atrium is a place for escape,  for meditation,   for reflection on space,  time,  and the eight-page paper due Thursday afternoon.

The atrium, filled with late-afternoon sunlight,  is otherwise empty.   The librarian takes a moment to enjoy the scene:  He stands near the graceful curving glass wall at the north end and surveys the space,  savoring the effects of the light on the stainless steel,  the glass,  and the wood paneling.

The peaceful quiet reassures him that in a violent world,  it is still possible to create a sanctuary where the quotidian hurly-burly does not drown one’s thoughts.   The librarian puts his hands in his pockets and stands at ease.    He hears nothing but his own breathing,  the distant hum of the ventilation system — and the busy rustling of papers.

The Thompson Library ghost has not completed his day’s inquiries.   Or her inquiries.   Since no one here has met this spirit in the flesh,  or in the ectoplasm,  we are unsure to which sex it subscribes.   We know only that our ghost is a busy one,  with a long day’s journey through his researches fading into night.

When the day’s patrons have left their studies to return to the warmth of their friends and families,  the Thompson Library ghost pursues his quest with unrelenting devotion,  flipping through page after page in a feverish search for some unknown,  and perhaps unknowable,  truth.

The first time I heard him as I made the Saturday closing round several years ago,  I was convinced that a preoccupied patron in an obscure spot was leafing frantically through a book or journal.    My careful investigation led only to my doubting my own ears:  I found no one,  but I continued to hear turning pages.

Imagine my relief when other library staffers reported the same observation.   Most recently reference librarian Paul Streby,  a man not given to fanciful conclusions,  discussed our invisible friend with me in a state of some concern.   “Do you think he’ll ever find what he’s looking for?”  he said.

Who is our ethereal patron?   Speculation is only too easy.   The page-rustler could be the restless shade of a long-gone scholar whose lifeline frayed out before he completed the one great work that would have rendered his name immortal.

Could this phantom’s origins go back even further,  to the days when the old Flint Public Library,  built with a Carnegie grant furnished in 1905, stood just down the street from the place the Thompson Library now occupies?   Picture if you will some turn-of-the-century Flint bookman bent on a mission of the most arcane sort, lost in time and space — but at home in the Thompson Library,  convinced that the next page,  or the next,  will yield the truth so long sought.

We wish him well.   We invite him to stop by the reference desk to ask for help,  even if his origins and motives baffle us (a situation we experience with some of our corporeal clients).   In any case,  we know one thing:   In the library,  after hours,  we are never alone.   The rustling of pages proves it.

Assistant Director of the Thompson Library

We still feel his presence.