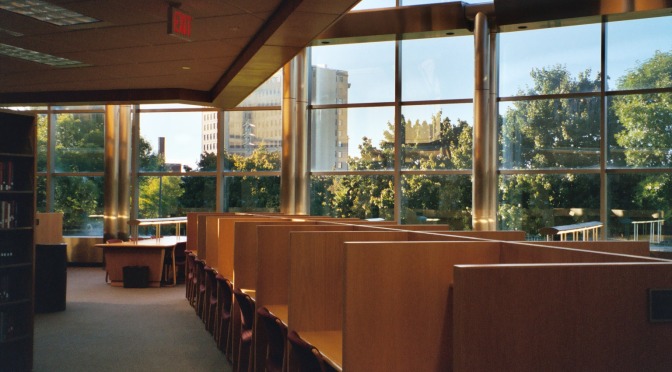 During the winter semester of 2015, Thompson Library (in conjunction with Student Life) ran a trial of later closing hours to determine the user demand and cost effectiveness of remaining open until 2 am.

The library was open until 2 am for a total of 56 days during the Winter 2015 semester.

The 2 am closing would add 8 additional hours per week to our standard 92 hours of operation, taking us to a total of 100 hours per week.

During this period, we did not add new personnel.  This put considerable hardship on our current staff.   However, the project was intended only to determine demand at this time.    Sufficient demand for library operations extending to 2 am permanently would lead the library to implement phase two; hiring new personnel to cover the additional operational hours.

Detailed statistics of building usage were kept throughout the trial period, both by date and by hour.  Therefore, we now have records of numbers of people in the building at various hours of the day and on various days of the week.

As is usual for the library, during the week before final exams (known as Study Week) the library remained open 24 hours (Monday – Thursday), closing finally at 8 pm on Friday of Study Week.

In general, while some students did choose to come to the library between midnight and 2 am, the study did not show a continuing or increasing number of students in the building after the standard closing time of 12 midnight during the trial period.  That is to say, the usage from midnight to 2 am was insignificant compared to our overall operation statistics.

Average usage figures for the entire semester did turn up some interesting statistics.  We will provide the simple count numbers within this article and offer links to the full study documentation for those who would like to see the detailed numbers gathered in this study.

Interesting facts gleaned from the study:

Our staff is to be commended for the effort they put into making this study a success.  Their diligence in gathering statistics (as well as making students feel welcome in our facility during the late hours) has been noteworthy.

This study has not been the first or only attempt by the library to determine our optimum operational hours.  Over the past 10 years, the library has  increased its hours of operation  from 67 hours per week to the current 92 hours per week based on usage stats obtained through previous studies.

However, the inevitable conclusion of this study is that the demand for use of the library facility peeks at 10 pm and declines rapidly thereafter, with insufficient usage after midnight to warrant continuing this trial or expanding current hours of operation.

Therefore, library hours of operation for the upcoming fall/winter semesters will remain with  Monday through Thursday opening at 8 am and closing at midnight.

For further reading, the library has posted both the brief statistical synopsis of this study and the full report of the project in .pdf’s available from the library through the links below .

Full Report of the 2 am Pilot Project Study.