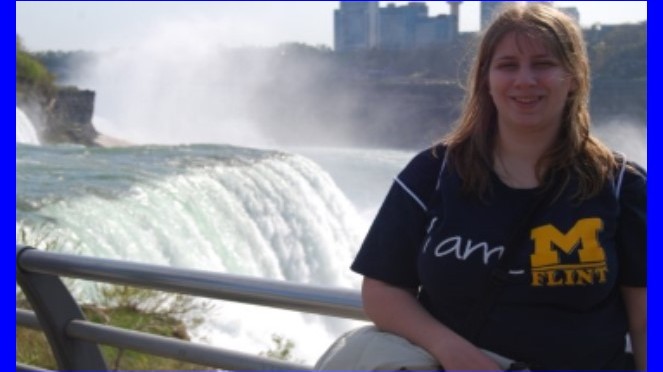 This month we highlight one of our dedicated library staff, Desirée Lynn Sharland.

Desirée (aka “Desi”) has been working in Thompson Library for about five years now, though not as a member of our full time staff.   Desi came to us from the Honors Program (solicited directly by the Program Director, Dr. Thum, from her local high school of Goodrich, where she was 3rd in her class).   Desi spent  4 years during her undergrad studies as a library Student Employee at the Circulation Department .

But not JUST Circulation.   She spent some time helping out in Tech Services.   And when the library Director’s secretary needed an assistant, Desi was selected for that position based on her record as a reliable, responsible and very capable employee.

While working in the Director’s office,  Desi handled various tasks, including ordering supplies, creating spreadsheets, filing, answering the phone and other clerical duties.

It was at the Circulation Desk where Desi’s talent shone brightest. She quickly learned and became proficient in the special library management software system, interacted with our library patrons in a highly professional manner and was always eager to take on additional assignments. Since she demonstrated that she was exceptionally bright and capable, she was selected to work with the head of the unit on several special projects, such as the recent reorganization of the Kresge books to first floor and compacting Flint materials on the second floor.

As a UM-F student, Desi progressed through the Honors Program … with honors!    As part of the Program requirement for coursework (off campus),  Desi elected to attend Cambridge University in England where she studied medieval literature, focusing primarily on King Arthur and Robin Hood. Taking advantage of the unique opportunity afforded her, she spent an additional four weeks touring sites in England related to Arthurian legends and legacy, the subject of her Honors Thesis (“British National Identity and King Arthur”). Side trips to Wales, Scotland and Ireland rounded out her English travels, visiting such sites as Stonehenge, Caernarfon and Goodrich Castles (see photos).

That wasn’t the end of her world travels. In 2010 Desi visited Poland, touring historic sites throughout that country as well. Not surprisingly, Desi would like to pursue her interests in history, literature and languages into an eventual career.

One option she sees as a route to that end is a master’s degree in Library Science, based in no small part on her experience working at Thompson Library. She is also mulling over the possibility of a second master’s in museum studies as well, just to round out her credentials in a field she loves.

For the balance of the summer, though, we have her here at Thompson Library where she now has full staff employee status, working as a supervisor at Circulation and directing the work efforts of the next generation of library student assistants , ensuring that our library runs smoothly and efficiently.