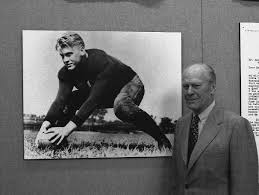 Football fans know the intense emotions generated by their favorite sport and understand that sometimes history is made both on and off the field during a Big Game.

The 1934 game against Georgia Tech played at Ann Arbor went down in the history books, but not for anything that happened on the field. team that included an African American player (Willis Ward, jersey #61), one young Michigan player took a stand.   A 20 year old Gerald Ford (jersey #48) decided to quit the team if Ward wasn’t allowed to play. Only Ward himself was able to change his mind.

Did this unknown young man’s protest against inequity make a difference? Perhaps not in this game, but it certainly stamped the people involved.

The Thompson Library has acquired the video DVD (available soon) BLACK & BLUE, a documentary about the ‘34 game.   It includes interviews with Mr. Ward (‘35), who’s education was funded by collections from churches and the black community of Detroit.

The purchase of this video was made through a gift from the Friends of the Thompson Library.   For more information, see our library website.

DVD will be available soon in Thompson Library.