What does “love” mean? Student actors, and their director Janet Haley, will explore this question in BIG LOVE, the second production of the UM-Flint theatre season. The play opens on January 27 and runs through February 4, 2017. It is a contemporary revision of one of the western world’s oldest plays, The Suppliant Women by Aeschylus.

“This piece is so unlike what people may think what a ‘play’ is,” said Haley. “[It] features song, dance, poetic language, gorgeous costumes, and a stunning scenic landscape. BIG LOVE examines and celebrates love, in all its manifestations.”

BIG LOVE is the story of fifty brides on the run from arranged marriages—and what happens when they take refuge in an island villa with their fifty grooms in pursuit.

“It’s called BIG LOVE for a reason. These characters have real epiphanies about themselves and the world. It’s not a romantic comedy, a little romp in Italy, it’s not Under the Tuscan Sun,” noted Haley. “This play is giving our students a wide and diverse set of opportunities to be involved in—it’s a very diverse composite of character perspectives, gender and sexual identities, age and experience range.” 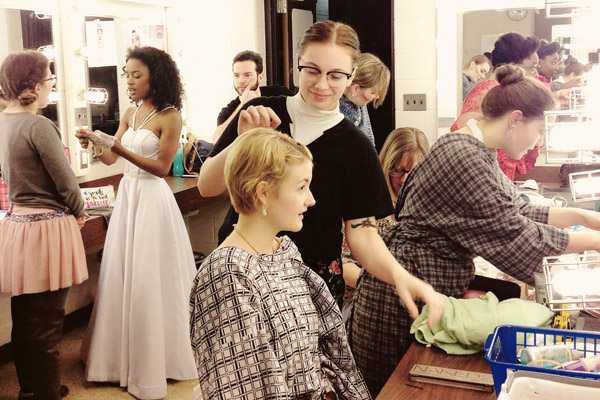 Make-up, costume, and hair for the UM-Flint Theatre production of BIG LOVE.

Layla Meillier, a Geneseee Early College student, English major, and Women’s & Gender Studies minor, agrees. “Since I often study gender and communication,” she said, “I have been thinking a lot about traditions and binary stereotyping and how this show enforces and challenges gender roles.”

Meillier has found herself exploring themes of the play in her own life: “love in a large sense and how it manifests and conquers. Romantic love, sister love, humanity love. I have a sister and I think about how I would do anything for her when justifying the plot and text.”

Computer Science major and actor Matthew Statson added, “Every character in this show searches for a ‘comfortable’ state that they might find in another person. It’s important to remember that no matter what our intentions or goals are in life, how we accomplish it and treat others in the process may be the most important thing than actually achieving the overall goal.”

The staging and movement sequences of BIG LOVE were devised in collaboration with the student company and students hold leadership positions on the production team as Dance Captain, Fight Captain, Stage Manager, and Costume Designer, among others.

“It’s a highly collaborative endeavor,” said Haley. “[The students] were inventing, creating, and devising something together as a group. That’s different than there being a script that tells you all of the words to say and where you are in space. This collaborative way of working ultimately helps our students learn how to have confidence in their ideas, to risk, to experiment, to research, to test. To know that not everything is going to be the right answer; it’s kind of scientific. They are going in to try stuff—as you would in a lab—and some of it’s not going to work, and we’re okay with that, and we’re going to keep trying things. Because whatever doesn’t work puts us one step closer to discovering what will work.” 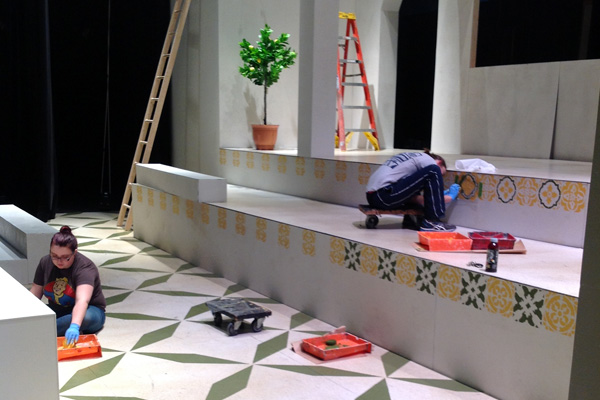 The production style also reinforces lessons of effective communication and listening, respect for others’ points of view and values, and a willingness to try new things. “I think this helps their citizenship skills,” noted Haley, “their personal responsibility. We talk about teamwork a lot, it’s a pretty complex thing.”

Meillier appreciates the intense experience. “I have gained so much from this production,” she said. “I have made so many friends and deepened my understanding of theatre. This piece has opened my mind to so much newness. I have been challenged in frequently incredible ways.”

Both cast and crew members believe BIG LOVE will appeal to a wide audience.

“Love is such a universal entertainer,” said Meillier. “Many in this community will be able to relate to what we have created no matter their sexuality or gender identity/expression. So much is considered and presented to the audience, every character is working from a different place and it is difficult to see clearly who may be in the wrong.  [Playwright] Charles Mee really gets you to think about your values and reaccess your ideas of good and bad.”

Added Statson, “In the extremes that this show goes to explain how love affects people, we hope it shines a light in your own life on where love hits you, and what you choose to do with that.”

BIG LOVE is recommended for ages 18 and up. Mature content and strong language. Strobe lights. Stage violence. Running time is approximately 100 minutes with no intermission.

Tickets are available by calling (810) 237-6520 or at the UM-Flint Theatre Box office (buy ahead or at the door). Show times start promptly as stated below, please arrive early to purchase tickets.