In late June, 2016, Dr. Rajib Ganguly, Associate Chair of UM-Flint Physics and Associate Professor in the Department of Computer Sciences, Engineering and Physics, received some exciting news: his proposal to use the Hubble Telescope to observe eleven objects in deep space was approved.

Dr. Ganguly’s research will claim 19 of the spacecraft’s orbits during the next year. Over 891 proposals, requesting 25,600 orbits, were submitted this year–while only 3764 total orbits are available.

Dr. Ganguly’s successful proposal was a first for him and for UM-Flint.

In the UM-Flint Physics and Astronomy programs, Dr. Ganguly is known for his research on quasars–or, as he describes them, growing super-massive black holes that reside in the center of galaxies.

Read below as Dr. Ganguly shares more information on his upcoming work with the Hubble Telescope and other areas of research:

In everyday terms, what is your field of research and study?
I’m interested in the understanding the biggest, most massive black holes in the Universe, how they grew to be that size, how that growth affects its surroundings, their relationship to the galaxies in which they reside. To do that, I combine both an empirical and a theoretical approach, using data from a wide variety of telescopes (including Hubble!) and computer simulations.

What do you find fascinating about this work?
That’s a loaded question that could be answered in a many ways! I once posed a somewhat related question to an group at a recent outreach event: What do you think is the most awesome thing about space? I got lots of interesting answers mostly naming specific objects, like black holes, or phenomena, like the expansion of the Universe. Then I told the audience my answer. I find it completely amazing that, using only information encoded in the light that we get here on Earth, and our own ingenuity, we can figure this out about things in space. It is striking that the Universe appears to obey certain rules and that we humans can have the audacity to try to figure out what those rules are. That might be a more generic answer for any us doing research in the physical sciences.

Without getting too esoteric, the current research effort is interesting on several levels. We (the astronomy community) are trying to tell the story of how structure emerged in the Universe, how galaxies formed from that structure, and how they evolve. The growth of supermassive black holes in the nuclei of galaxies appears to have a connection with that evolution. Furthermore, we observe that, in some of these actively growing black holes, there is a substantial amount of matter being expelled from the system, which seems counter-intuitive. How does matter escape from the vicinity of a black hole? There is interesting, and extreme, physics that is needed to explain what is going on.

By testing our ideas about how those rules of nature work in the extreme environment of a black hole, we can hope to improve our understanding of those rules. And with greater understanding comes a greater power to help ourselves. 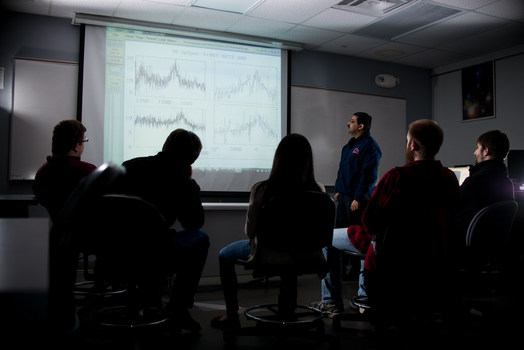 What is your history with the Hubble Telescope?
I have a long history with the Hubble Space Telescope. Hubble was launched in 1990 and I began graduate school at Penn State in 1996. My first task before classes even started in my first year was to help my to-be-advisor finish preparing proposals for, if I recall correctly, the fourth cycle of Hubble observations. (We’re heading into the 24th cycle now.) By the time I was in my fourth year of grad school, I was writing my own Hubble proposals. I actually wrote one to fund my PhD dissertation research which repurposed existing Hubble data. I defended my PhD in 2002, and my first post-doctoctoral position was as a research scientist at the Space Telescope Science Institute in Baltimore, MD. That is basically ground-zero from where Hubble is operated, and the data are archived.

There are many divisions at the institute: a division for each of the instruments, a division for archiving the data, a division for conducting outreach, etc. My supervisor was connected to one of the instruments that was to go up with the fourth servicing mission. Of course, 2003 saw the tragic loss of Space Shuttle Columbia and the astronauts on board, which then grounded the remaining shuttle fleet, and the cancellation of that mission. That was not a happy time, and many of us had to reinvent our research goals/methodology, which I did during my second post-doctoral position at the University of Wyoming. Fate can be rather twisted, though. Eventually, the shuttle fleet was brought back for a time, Hubble was serviced again and those instruments brought new life to the observatory. My then-supervisor, Ken Sembach, is now the director of the Institute. And the new proposal that will see UM-Flint’s first Hubble observations will be taken with the very instrument that we were going to use back in 2003.

Who are you working with on this project?
For my sabbatical this past Winter semester, I went back to my old stomping grounds at Penn State. There, I continued working with my dissertation advisors, Professors Jane Charlton and Michael Eracleous. They are my primary collaborators on this project. I am also collaborating with Professor Charlton current graduate student (my academic brother), Chris Culliton, as well as Professor Eracleous’ post-doctoral researcher Dr. Jessie Runnoe. Dr. Runnoe actually did her PhD at the University of Wyoming, and worked with me while I was there. She will recently moved to the University of Michigan-Ann Arbor.

How will the data from the Hubble help advance your particular research?
There are a number of questions regarding the matter that is being ejected by black holes that are growing in the cores of galaxies. How much is there? How does that compare with how much is falling in? How does it get ejected? The inflow likely takes the form of a thin disk accreting onto the black hole. What shape does the outflow take? What governs that shape?

In a previous study, we identified targets in the existing archive of Hubble observations that were also luminous in the radio band. Radio emission arises from jets of material travelling at relativistic speeds along the rotation axis of the black hole. As a by-product, we can use radio maps to gauge the orientation of these systems. We found two things from that study: (1) nearly all of the radio-luminous objects are viewed with the jet pointing roughly toward us, and (2) none of them show evidence for outflowing material. So, the question is: Are these two things related? Is this telling us something important about the geometry of the outflowing gas? Or is there something more fundamentally, and subtly, heinous about growing black holes with jets that prevent them from having the types of outflows we observe in other objects. [I should note here that the jet itself does not include a sufficient amount of material to provide an explanation for the ejected matter that we observe.] So, we identified a sample of radio-luminous objects where the jets are not directed toward us and convincingly proposed to observe them to test the hypothesis that this is just an orientation effect, that we are getting at the actual geometry of the outflowing gas. A “null” result – that we don’t find any outflows in the proposed sample – will indicate the latter option, which might be even more interesting in terms of understanding what physics is important in driving outflows.

How will UM-Flint students be involved in this research?\
There are a number of aspects of this particular project that my students will assist me with. As the data are collected by Hubble and transmitted down the Earth and archived, we will need to download the data, and to process it so that we can make measurements of it. (The processing has to do with accounting for the ways in which the telescope and camera behave, and calibrating the data.) Since our primary goal is a fishing expedition, our first step will be to count the fish and to compare the statistics of outflows with other samples of objects. Furthermore, for any outflows that are detected, we want to use the high resolution afforded by the Hubble Space Telescope to make measure how much gas there is, and the characterize its physical conditions. This will shed clues as to the nature of the outflowing gas, and the relevant physical processes that affect/drive it.

What value can the general public find in attending your outreach events?
Science is fun, and exciting, and important, and necessary. There isn’t really a price tag on the scope of human knowledge about how nature works, and the rigorous means we use to expand both the breadth and depth of that knowledge. Our primary vehicle for public outreach is a massive event that we call AstroNite, offered once during each of the semesters (October for Fall, April for Winter).  During those events, we have activities that cover how we use information that is encoded in light to learn things about the Universe, what kinds of tools and machinery (e.g., telescopes, Mars Rovers) we use to explore other places, and how we can use observations to infer the story of planets, stars, galaxies, and the Universe as a whole.

This is the boldest and most audacious application of scientific principles – learning about no less than the entire Universe with just what we have figured out here on our tiny, precious Earth–and we use it to help inspire the next Carl Sagan, or Richard Feynman, or Stephen Hawking.